I am Michael the Archangel, the Defender of the Faith of your Lord and Saviour, Jesus Christ. And I come to you today – to the People of the United States of America – bearing a Message from Your Heavenly Mother, who reigns over your land in the most difficult period in your nation’s history.

For it is the Mother of your Saviour and Redeemer who will crush the head of the serpent that is running rampant through your nation and states in these End Times. The evil one is running rampant, for he knows his days are numbered; his time to assert his power over his minions, both willing and unwilling, is coming to an end. The day will soon come when the Father in Heaven so divines that the Blessed Mother of your Redeemer will crush the putrid head of satan, lucifer, moloch, and baal, including these and all other heads of the ancient evil that will be finally crushed and removed from the face of your country, as well as from the whole world.

The time is near for you to celebrate the approaching Great Transformation to a New Heaven and A New Earth!

Praise God! The time is near!

Therefore, this is a Celestial Call to Arms that I make on behalf of your Blessed Mother who speaks with the full authority of the Father’s Son as well as of the Father in Heaven, Your Creator.

The Call to Arms is directed to those of you who have chosen to be Powerful Prayer Warriors in these End Times. It is also a call to those of you who have not yet decided to arm yourselves through the Power of the Holy Spirit to join with your Saviour and Redeemer and His Heavenly Mother to crush the head of the serpent and to defeat his satanic minions here on Earth. For nothing else in your earthly mission, individually or collectively, is more important now than your participation to defeat the enemies of all that is good!

As the Messages from Heaven have advised you for many months now, your Heavenly Support has been lifting the veil from the serpents who have been slithering under the slime and the rocks for many centuries now. Through the discernment that many of you have been given as a gift of the Holy Spirit, the minions of satan can no longer hide.

Desperate in their inner fear and putrid knowledge that they and their sinister plans have been discovered, they are now proudly declaring their allegiance to the evil one, boasting so proudly, because they are delusionally believing that the demonic power that has gifted them with great wealth and success in this earthly life will now lead them to their ultimate victory – the enslavement of all of mankind, a population that they intend to severely reduce which they have already begun with their arsenal of biological weapons that they have unleashed on humanity.

Have no doubts! You are Powerful Prayer Warriors in a Globalist War Against Humanity – waged by the sinister global elites, who have now been clearly identified for you. Know your enemy and stand with your Heavenly Father, your Saviour and Redeemer, your Blessed Mother, and all the Angels and the Saints, for you will defeat the evil through the power of your prayers, as well as through the secular activities that will be necessary for you to defeat the evil one; to defeat their new world order; and to usher in the Father’s Plan for All Mankind – a New Heaven and a New Earth.

Many of you have been given the gift of discerning the good leaders from the evil leaders, and you are already going about the work of assisting the Redeemer, as he separates the wheat from the chaff, so that you know who you can trust as Chosen Leaders of the Father in Heaven, as opposed to his enemies.

If you doubt your own ability to discern the good from the evil, you can start by supporting all of your leaders who stand for the Sanctity of Life. You must vehemently oppose those leaders who support not only the taking of a child’s life from the mother’s womb, but who also now loudly and proudly support infanticide or the taking of a newborn innocent child’s life.

The greatest threat to your nation and the world’s civilization is that you have become a nation and a world that supports the culture of death. It is this putrid energy of the evil one that has enabled him through his minions to exercise so much power and control over the people of your nation as well as over the whole world. Now that you know this to be the case, you must recognize who your enemies are. You must make your lists of who the minions of satan are.

Also, you must make a list of the Powerful Prayer Warriors who are your Leaders who stand up for the Sanctity of Life, for they have been chosen in these end times to defeat the enemies of all that is good and to usher in the New Heaven and the New Earth.

When you defeat satan’s minions who promote the culture of death, you will then defeat all of the other snakeheads of the Antichrist, and he will be thrown into the bottomless pit of fire along with the minions who have tried to enslave humanity for their greedy causes. Nothing that motivates you now as a Powerful Prayer Warrior should affect your ability to recognize that the Sanctity of Life is the one spiritual issue that is most important to Your Father in Heaven, His Son, Your Heavenly Mother, and all the Angels and the Saints.

When you defeat God’s enemies – AND YOU WILL – there will be a noble and Great Transformation that will sweep across the face of the Earth – a powerful wave of the Holy Spirit that will envelop and wrap all of God’s Children in the Heavenly Light and Love of the Father Creator.

This is your goal as a Child of God and a member of Humanity here on Earth – that you will participate in a New Heaven and a New Earth!… finally!

THANKS BE TO GOD!

Please help spread these messages of faith, hope, salvation, defense against evil (by email, printing, Facebook, Twitter, and other media) to your loved ones, your friends, and all the people you may meet, who seek salvation or who are in danger of being eternally lost. The Lord gives great graces and blessings to those of goodwill who, according to their own possibilities, collaborate with His Plan of Salvation. Who helps the Lord save a soul predestine his own, independently from the outcome.

May 1, 2020 - God the Father says: "Today, I invite you to realize that this virus - the coronavirus - is no ordinary disease. It has been created from human ingenuity to specifically target the elderly and physically challenged. This is the plan of future generations to purify the human race around the world. It was released into the general population ahead of schedule - by accident. Those in charge were waiting for less capable government officials in your country (USA) to be in office. Nevertheless, proposed harm is being unleashed on the whole human race."

"I tell you these things to help you to realize the underlying evil at work and hidden in hearts these days. You cannot be confounded by any turn of events. Over all situations, I am in Dominion. No one will be given power over you that is more powerful than your Eternal Father. Therefore, be emboldened with this knowledge. If you persevere in Truth, you have loaded your weapons against what seems to be and discharged them with Truth." (Source: Holy Love)

Consecrate your family and your home to My Immaculate Heart

2/4/2014: Homes where people pray and have devotion to my Holy Rosary will also be protected by Me... 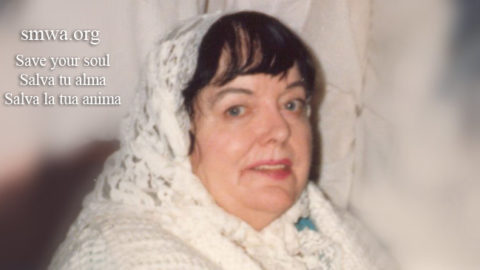 The Seer of Bayside: Recognize the Forces of Darkness (Part 1)

“It is all, My children, part of the diabolical plan to reduce man to a state of servitude to...

I will send My Warning in a time of chaos

There are evil deep state people behind the creation of these viruses. These people are the savage...

AMERICA! Time for a New Declaration of Independence from Satan and his Minions

Vigilant to the cunning plans of the world leaders

In his evilness, satan has altered his plan by extending his time

"Mother of God, Co-Redemptrix of the world, pray for us"

Give a joy to the suffering Souls of the Purgatory. Pray this simple prayer frequently and with faith. The blessed Souls, in return for your spiritual charity, will pray God for you and your loved ones to reach eternal life.

Be light for your blind and deaf brethren

True and false Gifts of Supernatural

Jesus: Pray for the United States, it continues its purification

A new sexual aberration is taking place in this sinful world