There have been since long ago, people infiltrated in the Church, whose sole objective is to change the sound doctrine. An ecumenical mass will be introduced in the Church 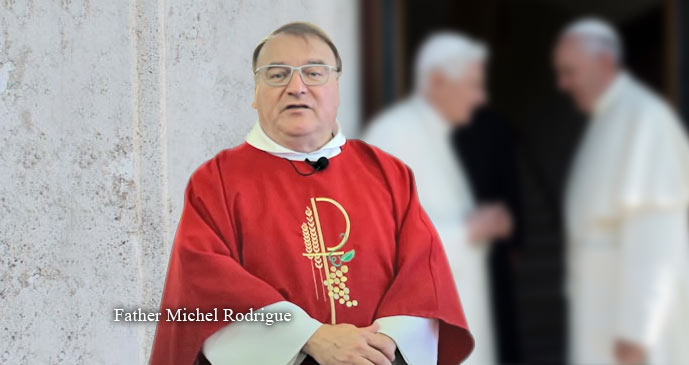 One of the prophetic messages that God gave father Michel Rodrigue is the message He gave him on January 3, 2019, where He talks about what will happen to the Church and explicitly to pope Francis and to pope emeritus Benedict. Father Michel says:

There have been since long ago, people infiltrated in the Church, whose sole objective is to change the sound doctrine. An ecumenical mass will be introduced in the Church formulated by different religious chiefs first, then by a committee of bishops and as final step, this model of mass will be proposed to the Holy Father, pope Francis in Rome.

A document of pope Francis ‘Magnum Principium’, came into effect on October 1 of the year 2017, which granted authority to national conferences and bishops to include new terms, prayers or modifications in the ritual of Holy Mass including the consecration for their countries. Many countries are now caught up in sins and problems of marriages because there have been many divorces and separations, and they have gone astray (says Father Michel) from the path of the Lord and there have already been many deviations regarding this subject. Each bishop interprets in his own way the Church Doctrine and that is dangerous. If the synods in countries have the authority to perform an to alter the rite of the mass, be assured that they will bring a bad offer to the Holy Father. If pope Francis does not sign their proposals, which would mean rejecting what the Holy Father already gave them as authority to do, then that would generate a schism and this is something that very soon we will see in the Church.

Roma will only sign the document because they will feel that all of the authority has been given to the bishops to make changes in their own countries. This does not mean that the pope signed the final document, but he will be around trying to have it changed, and we can only discern when we listen during mass, that the words at the consecration will not be the same” – says father Michel.

Father Michel says that “The antichrist always wanted to sit on the chair of Peter; pope Francis will be like Peter the Apostle, he will realize his mistakes, he will try to bring the Church together again under the authority of Christ but he will no longer be able to do it. Pope Francis will die as a martyr. Then the pope emeritus Benedict 16 will appear, who still wears his papal ring. He will try to summon a counsel to save the Church. I saw him weak and fragile, held on both sides by two Swiss guards. I saw him suddenly fleeing Rome due to the all-around devastation. He is hiding but he will be found afterward and I also saw his martyrdom.”

“Pope Francis does many things with good intention but he gives trust, relies on and gives liberties to bishops who are dangerous. He realizes that it brings rectification but it will be too late. God sends his prophets to communicate to His people what is going to happen, His designs His purposes, but only with prayer and fasting, you can change part of this prophecy, like the story of Nineveh where God sent Jonah to warn the people that he would destroy it; but through their prayer God had compassion and forgave Nineveh.

The Holy Mass as essence will never disappear nor the church because the forces of hell will not prevail against it. We will always find faithful priests and faithful bishops who will protect the true Doctrine.”

This is why the work God has entrusted to father Michel is very important, that of forming good and faithful priests for the end times.

Days of scarcity and of famine. Fire from the sky and from the bowels of the earth

Take advantage now that money still has value for you to provide yourself with food and supplies,...

The End of the Times

The day of the Lord will not come unless the great apostasy comes first. See that no one deceives...

Mother of God: USA scourged by Nature and terrorism will come

June 21 2017: Remain in expectation, Russia will take a decision that will affect all of Europe...

The great events of purification will begin this fall

Prophecies about the Great Cold

The Prophecies of Sister Elena Aliello