INRI: The True Meaning in Hebrew

INRI: The True Meaning in Hebrew

In Exodus 20.2 God reveals his name to Moses:

“I am the Lord, your God, who brought you out of the land of Egypt”

The word translated as “Lord” is the famous Tetragram that Jews can not even pronounce:

“YHWH,” vocalized in different ways such as “Yahweh”. The four Hebrew letters that make it up are these: “יהוה”, Yod-he-waw-he. Remember that Hebrew is read from right to left.

“And they took Jesus, and carrying his own cross he went out to the Place of the Skull, in Hebrew, Golgotha, where they crucified him with two others, one on one side one on the other, and Jesus in the midst. Pilate also wrote a title and put it on the cross; it reads, “Jesus of Nazareth, King of the Jews.”

Despite the passage in question is very famous, the scene that took place in front of the crucified Jesus,  must have been a bit different from how we have always imagined. John, perhaps, tried to emphasize this but the reader, who does not know the Hebrew language, is unable to comprehend the meaning.

The inscription mentioned by John is the famous letters “INRI”, depicted still above the crucified Jesus. The acronym, which stands for the Latin “Iesus Nazarenus Rex Iudaeorum“, means “Jesus of Nazareth, King of the Jews.”

But John specifies that the inscription was also in Hebrew. Not only that,  in such an important moment, the Evangelist seems to dwell on the details seemingly insignificant:

– The fact that many of the Jews read this inscription, because the place where Jesus was crucified was near the city.

– The chief priests who come to Pilate asked  to change the inscription.

– Pilate refuses to change it.

Pontius Pilate, who was an officer of the Roman Empire, probably did not understand that, unwittingly, had created a bit of embarrassment – if we want to call it that way  – to the Jews who observed Jesus crucified with that inscription above the head.

Henri Tisot, Hebrew expert, turned to several rabbis to ask what was the exact enrollment of the Hebrew translation made complete by Pilate. He talks about it in his book “Eva, the woman” from page  216 to 220.

He discovered that it is mandatory grammatically, in Hebrew, to write “Jesus of Nazareth, King of the Jews.” With Hebrew letters we get “ישוע הנוצרי ומלך היהודים”.

Remember the reading from right to left.

So, in getting the Latin “INRI” acronym for the Hebrew you get “יהוה”, “YHWH.”

This explains the attention that John reserves to the situation that is taking place under the crucified Jesus. At that time the Jews saw the man who they had put to death, who had claimed to be the Son of God, by the name of God, the Tetragrammaton unpronounceable, engraved above his head.

It could not be good that YHWH was written there, visible to all, and tried to persuade Pilate to change the incision. That’s the phrase of the Roman procurator “What I have written I have written” acquires a meaning much deeper.

It sounds incredible? Do you think that Jesus had prophesied exactly this moment. In John 8:28 we read:

“So Jesus said,” When you have lifted up the Son of Man, then you will know that I Am “

To “raise” Jesus means the crucifixion. “I Am” alludes to the name that God revealed to Moses in Exodus 3:14:

Catholics, we have entered the Pre-Tribulation, obey the Commandments, go to Confession; receive the Holy Eucharist and pray the Holy Rosary daily to keep your faith and save your loved ones. Prepare for the events that will devastate our planet: plagues, famine, WW3, cataclysms, antichrist’s World Order 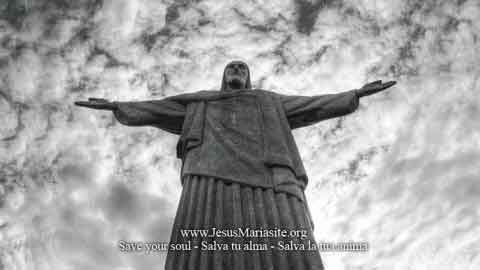 The four horsemen are making way for the beast. People of God prepare your provisions trusting in...

Souls are made in the image of God, but when the leprosy of sin covers them, they are like walking...

Quicken your step, as the elite are rising in haste, taking greater power

My People need to be cautious when My House warns them. Those who cannot store food will be helped...

Mother of God: Sun heat to cause devastation to man. Pray for Italy

Satanism as opposed to Deification Through Christ

Humanity is entering a time of revolts and confrontations

From this year on, the suffering for humanity will begin