When the Son of Man Returns

This circumstance is the loss of faith. in these days of yours, apostasy on the part of many of my poor children is inundating you more and more

When the Son of Man Returns

“You read in the Gospel:

Today I want to invite you to meditate on these words, uttered by my Son Jesus. They are grave words, which cause one to reflect and which succeed in making you understand the times through which you are living. First of all, you can ask why Jesus has uttered them: to prepare you for his second coming and to describe for you a circumstance which will be indicative of the proximity of his glorious return.

This circumstance is the loss of faith.

Also, in another part of Holy Scripture, in the letter of Saint Paul to the Thessalonians, it is clearly announced that, before the glorious return of Christ, a great apostasy must take place. The loss of the faith is a true apostasy. The spread of the apostasy is therefore the sign which indicates that the second coming of Christ is, as of now, close at hand.

At Fatima, I have foretold to you that a time would come when the true faith would be lost. These are the times. Your days are marked by this painful and significant situation, which was foretold to you in Holy Scripture: the true faith is in the process of disappearing in an ever increasingly greater number of my children.

The causes of the loss of faith are:

(1) the spread of errors which are being propagated and are often taught by professors of theology in seminaries and in Catholic schools and which thus acquire a certain character of credibility and legitimacy;

(2) the open and public rebellion against the authentic Magisterium of the Church, especially against that of the Pope, who has from Christ the duty of preserving the whole Church in the truth of the Catholic faith;

(3) the bad example given by those pastors, who have allowed themselves to be completely possessed by the spirit of the world and who become propagators of political and sociological ideologies, rather than messengers of Christ and of his Gospel, thus forgetting the mandate received from Him: ‘Go into the whole world and preach the Gospel to every creature?'(Mk 16:15)

Thus, in these days of yours, apostasy on the part of many of my poor children is inundating you more and more.

‘When the Son of Man returns…’

If indeed his return is close at hand, then my motherly action becomes more concerned and vigorous, in order to assist all my children to remain ever in the truth of the faith. This is why I have asked you to consecrate yourselves to my Immaculate Heart. This is why, in these times of yours, I have spread everywhere my Marian Movement of Priests: to form the little flock, reunited in the prayer of the cenacles and watchful in expectation – the flock gathered together and formed by me to ever preserve the true faith.

Thus, when the Son of Man returns, He will still find the faith on earth in all those who will have consecrated themselves to me, allowing themselves to be gathered together in the heavenly garden of my Immaculate Heart.” 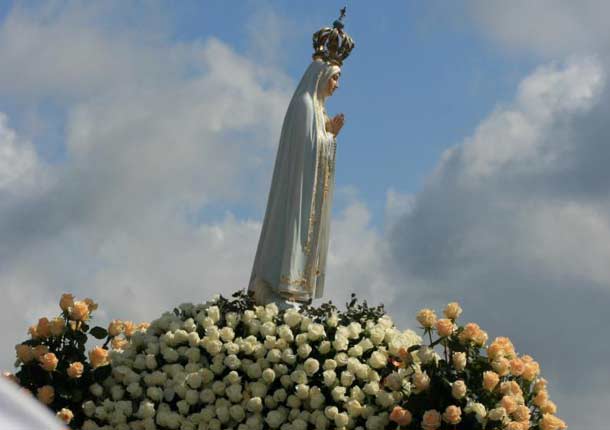 “To everyone who consecrates himself to me I again promise salvation: safety from error in this world and eternal salvation”

Virgin of Fatima, Mother of Mercy, Queen of Heaven and Earth, Refuge of Sinners, we who belong to the Marian Movement of Priests consecrate ourselves in a very special way to your Immaculate Heart.

By this act of consecration we intend to live, with you and through you, all the obligations assumed by our baptismal consecration. We further pledge to bring about in ourselves that interior conversion so urgently demanded by the Gospel, a conversion that will free us of every attachment to ourselves and to easy compromises with the world so that, like you, we may be available only to do always the Will of the Father.

And as we resolve to entrust to you, O Mother most sweet and merciful, our life and vocation as Christians, that you may dispose of it according to your designs of salvation in this hour of decision that weighs upon the world, we pledge to live it according to your desires, especially as it pertains to a renewed spirit of prayer and penance, the fervent participation in the celebration of the Eucharist and in the works of the apostolate, the daily recitation of the holy rosary, and an austere manner of life in keeping with the Gospel, that shall be to all a good example of the observance of the Law of God and the practice of the Christian virtues, especially that of purity.

We further promise you to be united with the Holy Father, with the hierarchy and with our priests, in order thus to set up a barrier to the growing confrontation directed against the Magisterium, that threatens the very foundation of the Church.

Under your protection, we want moreover to be apostles of this sorely needed unity of prayer and love for the Pope, on whom we invoke your special protection. And lastly, insofar as is possible, we promise to lead those souls with whom we come in contact to a renewed devotion to you.

Mindful that atheism has caused shipwreck in the faith to a great number of the faithful, that desecration has entered into the holy temple of God, and that evil and sin are spreading more and more throughout the world, we make so bold as to lift our eyes trustingly to you, O Mother of Jesus and our merciful and powerful Mother, and we invoke again today and await from you the salvation of all your children, O clement, O loving, O sweet Virgin Mary.
(with ecclesiastical approval)

History of the Marian Movement of Priests 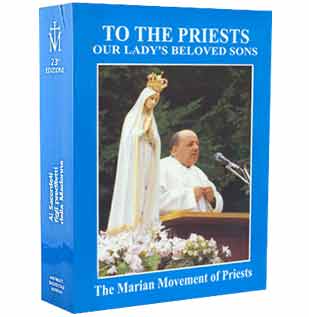 On the 8th of May, 1972, Father Stefano Gobbi, a priest from Milan, Italy, was taking part in a pilgrimage to Fatima. While praying in the Chapel of the Apparitions for some priests who, besides having given up their own vocations, were attempting to form an association in rebellion against the authority of the Roman Catholic Church, an interior voice urged Fr. Gobbi to have confidence in the Immaculate Heart of Mary.

What Fr. Gobbi had just experienced was an interior locution. It is not an apparition or other communication perceived by the human senses, but a spiritual phenomenon present in the life of the Church and described in manuals of Catholic theology. The messages (interior locutions) are the gift by which God wishes to make something known to humanity, in Fr. Gobbi’s particular case by means of the Blessed Virgin Mary.

In July 1973, Fr. Gobbi began to write down these interior locutions which he was receiving. The messages, dating from July 1973 to December 1997, are published in the book, “To the Priests, Our Lady’s Beloved Sons.”

Get a copy of the Book: “To the Priests, Our Lady’s Beloved Sons” Book Containing Messages 1973-1997

Satan, my Adversary, with snares and by means of his subtle seduction, has succeeded in spreading...

The Angel with the Key and the Chain

The chain of the Holy Rosary brings about, in the end, the result of making Satan completely...

Confusion is spreading within the Church, where everything in the field of dogma, liturgy and...

I am coming down from Heaven

The Mark on the Forehead and on the Hand

Great Is My Sorrow

The Announcement of the Three Angels