I am Michael the Archangel, the Protector and Defender of the Faith of the Father in Heaven through His Son, Jesus Christ, the Redeemer of the Father’s Children.

Listen Carefully, for I am delivering this Message Loudly to the People of the United States of America.

A Global War has been declared against your nation and your people; against the Bill of Rights and the Constitution that was inspired by the Father Himself from the Heavenly Realms. The Father in Heaven has charged me as Michael the Archangel to deliver this stern warning to you.

You are under attack from places and principalities in the darkest of the spiritual realms. In particular among humanity, your nation has been singled out by satan, lucifer, and the other principal demons to be destroyed to accomplish the evil one’s goal – the enslavement of all of humanity under his control.

This is the last battle that the evil one will be permitted to wage against humanity before the wrath of God descends upon all the evil in your world that is being waged by the evil one and his minions.

This is the last battle; this is the end. The Father in Heaven will be victorious in the End!

So be it! Thanks be to God!

However, in these Final Days of the End Times, the evil one is focusing his weapons targeting you, the people of the United States of America as the last defenders of all that is good in your world.

Make no mistake! You are in the final battle of Good versus Evil. The evil one sees the evil plan clearly that he must wage, and many of you have prayerfully developed the discernment to recognize this evil from the good and to identify the satanic minions who are attempting to control you.

By now, you must already have the discernment to discern your leaders who are doing God’s work as opposed to the many demonic leaders who are the minions of the evil one. The demonic attacks against the nationality and sovereignty of the United States of America are coming from within – from your very own citizens who have sworn their allegiance to the evil one by embracing anarchism, Marxism, socialism, and communism – as well as from outside your country by communist dictatorships and their globalist partners who are hell-bent to do lucifer’s will through their global secret and occult societies, many of which have been identified by you.

It is readily and easily identifiable who the enemies of your nationality and sovereignty are within your own borders. Identify your political leaders and power brokers who are organizing financing and supporting anarchist, Marxist, communist, and socialist entities, and you know your enemy by their actions.

Identify those who are fomenting chaos and confusion – diseases of the evil one – and who are rioting, looting, and attacking you – they are the minions of the evil one – many of whom are like rabid sheep blindly committing acts of violence. That is the will of their leader in the alternate evil realms – satan himself.

Your nation of the United States of America stands alone now in the global arena, for the evil one now has control of the dark communist regimes as well as other regimes controlled by the globalist occult societies who cower and hide in silence, while they give the appearance that they are the altruistic leaders who will save the world through their demonic New World Order.

Let it be said now! This New World Order is not of the Father in Heaven, nor of His Son, Jesus Christ, the Redeemer of the world; nor of your Blessed Mother; nor of all the Angels and Saints.

This demonic New World Order is the work of satan, who has been secretly and covertly developing his plans through his cowardly minions for centuries.

Those of you who persist in supporting your leaders, who are aligned with these demonic globalists and their New World Order, are putting your eternal and everlasting future at great peril. You must cease and desist from supporting these demonic minions now or risk eternal damnation. Can I make my stern warning to you any more plain and simple?

Follow and support your leaders who are calling out this New World Order for the demonic plan that it is. Identify and expose any of your world leaders, national leaders, power brokers, or politicians who are of this new world order – regardless of their political or religious identity. No Pope, or Bishop, or Priest must be allowed to support satan or his plans. You must expose and defeat them. In the finality, you will be victorious.

However, in the meantime, the chaos and confusion that the evil one has created and is accelerating will continue – unless the Lord’s Powerful Prayer Warriors, secular leaders, and men and women of steel rise up now fully and without reserve to attack and defeat the minions of satan.

This is your final calling to battle. Recognize the importance of this moment! Do I make myself perfectly clear? Do not deflect or ignore my words! The future of humanity is at stake!

If you are victorious now, satan and his minions will be defeated sooner rather than later, but not without the work of those of you who hear and believe in our ‘Messages from Heaven’ to you the People of the United States of America.

Rise up and take arms now – both spiritually and secularly. Join with the Father in Heaven; His Son your Redeemer, Jesus Christ; Mary, your Heavenly Mother; and all the Angels and Saints to usher in the Father’s plan for a ‘New Heaven and a New Earth’!

This is the final Battle Call!

So be it! Thanks be to God!

The earth will shake in its big belt: Puerto Rico and Dominican Republic will suffer

October 31… This date in particular has been offered to Satan by his followers by means of...

Beware, you fall into the deceit of the false messiah; remember that you cannot see or hear him,... 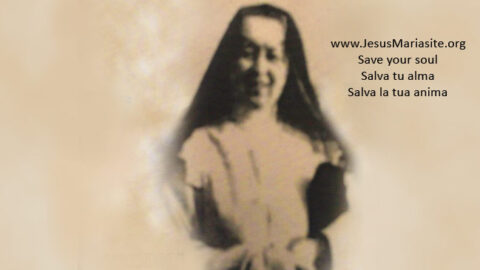 Make at least once the Prayer of Life Offer, read the Promises

At the hour of death I will be at their side and I will take their souls, without passing through...

Climate Change: The minions of satan are planning to scare you

AMERICA! Time for a New Declaration of Independence from Satan and his Minions

In his evilness, satan has altered his plan by extending his time

Prayer to destroy the evil spirits, demons, minions of satan