From Rome will come that which will cause the whole world to be astounded; the spear again pierces the Side of Our and Your King

OUR KING AND LORD JESUS ​​CHRIST BLESSES YOU AND URGES YOU TO RENEW YOURSELVES AS HIS CHILDREN, IN SPIRIT AND TRUTH.

There is one call: RETURN! Without quickening your step you cannot attain what is necessary for you to resist the trials of evil.

You will not see floods of water, but you will see fire come down from Heaven in the face of the evil in which a great quantity of human beings, members of the People of God, rage acting against man himself. REACT AS A GENERATION, AS CREATURES WHO ARE GOD’S CREATION!

INVOKE OUR KING AND LORD JESUS ​​CHRIST AND ASK YOUR GUARDIAN ANGELS TO KEEP YOU IN CONSTANT ADORATION SO THAT YOU ARE NOT DISTRACTED BY EVIL.

Children of Our Mother and Queen of all creation, be astute: this battle that the Devil is keeping up ferociously against souls reveals his central objective: disunity.

Do not let Satan deform your soul, do not allow your hearts to harden, do not look at the weaknesses of others with your lack of humility; you should not live trapped in a state of looking for other people’s faults, as this is dangerous for the soul.

Seek peace as one who seeks a treasure; focus your lives differently using memory to live by obtaining the greatest advantage from it. Memory is a great gift from God, do not muddy it with the past; facing painful memories the healing response must be a Divine remembrance; this will force you to act in the likeness of the Compassionate God, the Merciful God, the God of Love, God who allows the air to be breathed by the just and unjust, God who allows the sun to shine on the just and unjust. (cf. Mt 5,45-48).

Do not live by lesser memory, but by that provided by the Holy Spirit, by the memory that does not hurt, that forgives and uplifts you. Be astute: do not fight with worldly weapons but with spiritual weapons (cf. II Cor 10,3-4, Rom 13,12-14) in the face of the continuous attacks of evil, of which you well know it’s tricks and it’s persistence against all of Our Queen’s children, with the final goal of the Devil in the great tribulation being to destroy the children of Our and Your Queen and Mother.

THERE IS ONE ANSWER AND NO OTHER: LOVE.

It is urgent that you awaken and continually look at the world from a real point of view, in which you will find the disastrous spiritual, moral, social, cultural state of humanity, where evil reigns everywhere along with the satanic vandalism of death.

Do not insist on being stubborn and continuing to live by what the world lives; you need to nourish yourselves with Love, Unique Divine Love.

Humanity did not anticipate the current instant, but has destroyed most of the Dowry that God bequeathed to man, and at this instant he is living through the passive war in which the great Powers are immersed: the war of ideological domination in various countries , the war of religious persecution, the war of hunger, the technological war and the economic warfare through which power dominates and decides.

Beloved of God, humanity will suffer, NOT BY THE WILL OF GOD BUT BY ITS ACTIONS AND WORKS OUTSIDE GOD’S WILL.

Pray, the plague will become a pandemic and man will limit his actions in the world: prepare yourselves.

Pray, the continents are forcefully shaken.

Pray children of God, the economy will go from being man’s necessity to being one more god for this generation and its survival.

Pray children of God, from Rome will come that which will cause the whole world to be astounded; the spear again pierces the Side of Our and Your King.

Beloved of God, I am a Messenger and as a Messenger I urge you to remain at peace, so that peace leads you to equanimity facing the astonishing events of nature.

IN EVERY GENERATION GOD WARNS, MAN DOES NOT LISTEN AND DENIES IT.

Man suffers out of foolishness, and Divine Mercy is shown in Its Splendor to those who remain Faithful, making an effort to be better in every respect.

Apostles of the end times, be tenacious, robust in the Faith, and do not forget that the human clock does not advance but is going backwards.

Do not forget that THE MOST HOLY TRINITY AND OUR AND YOUR QUEEN ARE SUFFERING THIRST FOR SOULS.

In the name of God, One and Three.

Mother of God: The time for war is ripe

Pope Benedict [...] is getting weaker and weaker and it is more and more difficult for him to hold... 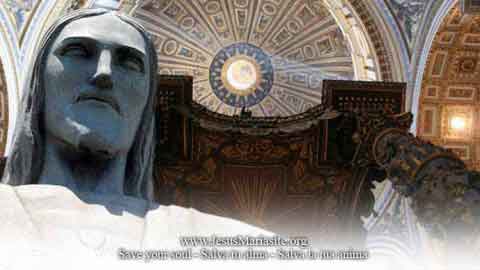 Great suffering is approaching the world

They are paving the way for the ONE RELIGION

Mother of God: Pray for Japan, radioactive contamination to Humanity is unprecedented.

Pray for the United States, it shakes and water purifies it

Mother of God: Pray, plague is spreading over the Earth

A big news will leave humanity without knowing what to think