God is light. This is the only thing that can still represent God without being antithetical to his spiritual Essence. The light exists, and yet it is incorporeal

(CEV) “The Notebooks 1943”, p. 129
Jesus says: “To know the mystery of God’s nature is not granted to your very limited intellectual capacities, to your embryonic spirituality. But the mystery becomes more knowable for the spiritual, amidst the mass of the so-called spiritual. The mystery is revealed with greater clarity to the lovers of the Son, to those who are truly marked by my Blood, because my Blood is Knowledge, and my Predilection is a School.

Today is a great feast in Heaven because all Heaven is today singing the Sanctus to the Lamb whose Blood was shed for the Redemption of man. You are one of the few, too few, creatures who venerate my Blood as it should be venerated; since it was shed that blood has been speaking with words of eternal life and supersensible knowledge. If my Blood were more loved and venerated, more invoked and believed in, much of the evil which leads you into the abyss would be dispelled.

This Blood spoke when it was not yet represented by the Mosaic lamb, behind the veil of the prophetic words under the sign of the preserving Tau; it spoke, after it was shed, through the mouths of the Apostles; it cries out its power in the Apocalypse; it invites from the mouths of the mystics with its calling. But it is not loved. It is not remembered. It is not invoked. It is not venerated. My Church has so many feasts. But a most solemn feast for my Blood is lacking. And salvation is in my Blood!

Today, the feast of my Blood, I shall clarify a mystery for you. Say, ‘Glory be to the Father and to the Son and to the Holy Spirit,’ for it is about Us that I want to speak. Figures have been necessary for your human dullness to conceive the Father and the Spirit, incorporeal beings of infinite beauty, whom you, however, do not conceive with your human senses. To the point that you do not readily turn to Them, with all the fullness of thought, to invoke Them as you invoke Me, whom you conceive of as the God-Man. You thus do not understand even distantly the incomparable mystery of our Trinity.

To conceive of God comparisons to created beings must not be made. God is not to be compared. He is. In being there is everything. But being has no body, and the eternal Being has no body.

Look: God is light. This is the only thing that can still represent God without being antithetical to his spiritual Essence. The light exists, and yet it is incorporeal. You see it, but you cannot touch it. It exists.

Our Trinity is light. An unbounded light. The Source of Itself, living by Itself, and acting in Itself.

God is light. A vast, majestic, and peaceful light is given by the Father. An infinite circle which has embraced all Creation since the moment when ‘Let there be light’ was said until forever and ever, for God, who existed eternally, has been embracing the Creation since it existed and will continue to embrace all that-in the final form, the eternal one, after the Judgment-will remain of Creation. He will embrace those who are eternal with Him in Heaven.

Within the eternal circle of the Father there is a second circle, begotten by the Father, working differently and yet not working in contrary fashion, for the Essence is one. It is the Son. His light, more vibrant, not only gives life to bodies, but gives Life to souls that had lost it by means of his Sacrifice. It is a flood of powerful, gentle rays which nourish your humanity and instruct your mind.

“Within the second circle, produced by the two workings of the first circles, there is a third circle with even more vibrant, inflamed light. It is the Holy Spirit. He is the Love produced by the relations of the Father with the Son, the intermediary between the Two, and a consequence of the Two, the wonder of wonders.

Thought created the Word, and Thought and the Word love one another. Love is the Paraclete. He acts upon your spirit, your soul, and your flesh. For He consecrates the whole temple of your person, created by the Father and redeemed by the Son, created in the image and likeness of the Triune God. The Holy Spirit is the chrism upon the creation of your person, made by the Father; He is grace to benefit from the Sacrifice of the Son; He is Knowledge and Light to understand the Word of God. A more concentrated Light, not because it is limited in comparison to the others, but because it is the spirit of the spirit of God, and because, in its condensation, it is most powerful, as it is most powerful in its effects.

That is why I said, ‘When the Paraclete comes, He will instruct you.’ Not even I, who am the Father’s Thought that has become the Word, can make you understand what the Holy Spirit can make you understand with a single flash.If every knee must bend before the Son, before the Paraclete every spirit must bend, for the Spirit gives life to the spirit. It is Love that created the Universe, taught the first Servants of God, spurred the Father to give the Commandments, enlightened the Prophets, conceived the Redeemer with Mary, placed Me on the Cross, sustained the Martyrs, governed the Church, and works wonders of grace.

A white fire, unbearable for human sight and nature, He concentrates in Himself the Father and the Son and is the incomprehensible Gem, who cannot be gazed upon, of our eternal Beauty. Fixed in the abyss of Heaven, He draws to Himself all the spirits of my triumphant Church and breathes into Himself those who are able to live by the spirit in the militant Church.

Our Trinity, our threefold and single nature is set in a single splendor in that point from which all that is is generated in an eternal being.

Say, ‘Glory be to the Father and to the Son and to the Holy Spirit.“‘

“These Notebooks belong to a category of mystical literature which the Catholic Church has long been familiar with: that of so-called “private revelations.” A private revelation is not binding for the faith of Christians, but its value is to be measured by its capacity to instruct and inflame souls, spurring them to love God more and apply divine teachings to their everyday lives. In the confidence—and the conviction—that this work superabounds in these inspired qualities, we offer it for the spiritual nourishment of readers. —David Murray
Content taken from the works of Maria Valtorta with the permission of the “Centro Editoriale Valtortiano Srl”- Viale Piscicelli, 89/91 – 03036 Isola del Liri, (FR – Italy), www.mariavaltorta.com, which has all the rights upon Valtorta’s Works.

This is Satan's last chance to make you fall: remain vigilant so that you do not fall into...

Mother of God: Pray for Italy, it is touched by terrorism 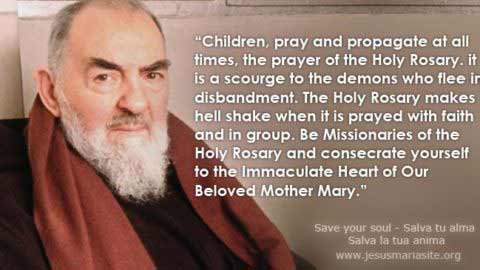 The prayer of the Holy Rosary is the most powerful spiritual weapon that Heaven has given you, to...

The Order of the Ten Commandments

The Charity of Catholics toward Those of Other Religions

The Mission of the Guardian Angel

Lack of Charity as an Obstacle to Conversion

The Importance to Give Thanks to God

The Mission to Be Creators with the Father

Maria Valtorta was born in 1897 and died in 1961 and she had visions and apparitions mostly during the period 1943 through 1947. During these Jesus appeared to her and literally transported Maria in time and space back to the time of Jesus. Maria "sees, hears" and writes it all down. She is not part of the scenes, just "a fly on the wall" so to speak. After some of the Visions Jesus literally "dictated" a lesson/tutorial to better understanding WHAT is in the Visions, and these dictations Maria wrote down.